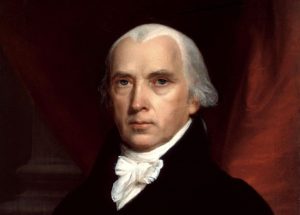 Date of Death: June 28, 1836
James Madison was known as the father of the Constitution and the Bill of Rights, the documents that help guide our way of life. He also helped the United States fight against the British in the War of 1812. During which, the British attacked he White House. What is best known about the attack is that his wife, Dolley Madison saved a famous portrait of George Washington.
Fun Fact: He was short (5 ft, 4 in.)