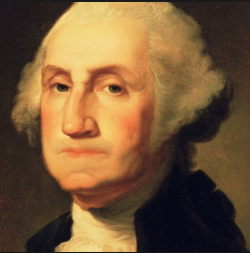 George Washington fought as a British soldier in the French and Indian War. He was selected as military general (Commander-in-Chief) during the Revolutionary War, which his role as leader of the military was decided during the Second Continental Congress. He served a role in the Constitutional Convention.

Fast Fact: Washington only had one actual tooth, with the rest being made of animal parts. He was also the only president to have not lived in the White House (it wasn’t made yet)